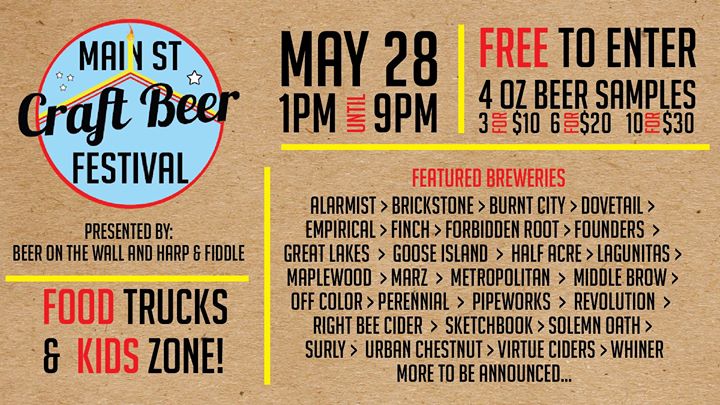 I want to talk a little bit about an event I attended last weekend – The first ever Park Ridge Maine Street Craft Beer Festival.

Now some of you may ask – but Steve, what does this have to do with being a better father or development?  Bear with me –

First – a quick summary.  Beer on the Wall – a craft beer store with a tasting bar, and Harp and Fiddle, an Irish pub and restaurant, co-sponsored the first ever beer fest. This is big news because Park Ridge, what I call heaven on earth, has been begging for a night life for years. We have had some fantastic restaurants open with great bars in the last couple of years. The beer store is a great addition. But, alas, we still don’t have a true ‘bar’. We have been a conservative town for a long time and people are excited and hungry to watch our little city grow.

So, last Sunday – from 1pm to 9pm, Maine Street was closed down. You could buy tickets for beer tastings – I bought 10 tickets for $30. Each taste was a 4 oz pour and there were probably 30 breweries represented.  The weather was great as I arrived about 1:30 and the crowds were already building.  I watched the band, let the kids jump in the bouncy house, bought cotton candy, met friends and tried beer.  The next day, I heard a lot from different people on their thoughts – which is what prompted me to review. I wanted to share the lessons I learned as I watched the positive and negative aspects of the first ever beer fest in my town.

It was a BEER FEST.

Now, the criticism I heard:

Now I’d like to remind everyone with a little  more praise:

This was the first ever. There was no way to KNOW it would be this popular or convince the city it would be this popular. Sometimes you just have to see an opportunity and decide you’re going to go for it – learn the lessons and make it better next time. You have to make the business case which is what these guys did. Two business owners saw an opportunity and worked together to put something on. It could have failed – but instead they learned so much and in doing so, brought something to Park Ridge we’ve never had.  How does this translate – if there is something you want to do – you have to figure out how to test – learn and determine if it’s worth moving forward.

A good friend used to tell me this all the time. These guys could have pushed the fest back – decided it was too hard or that they couldn’t get the resources they needed to make it perfect. But they didn’t. They figured it out. They took the space they had and the resources they had and they made a really good beer fest. Next year, they will take those learnings and make an even better beer fest.

How often does this happen to you? You want to do something but you doubt yourself or your ability. It’s why I haven’t refinished my basement – because it won’t be perfect if I do it. So I put it off – and it doesn’t get done. It’s how I feel about this blog of mine. I see amazing content out there and I wonder if I should abandon – but that’s letting the perfect be the enemy of the good. And writing is good for me.

And so could the attendees. For me, I had an idea this might happen. We had to be flexible. It’s why we went early. It’s why when beer lines grew long, I went to the more hidden shorter beer lines. It’s why when the crowds were so large and the kids didn’t like the food truck options, we ducked into Harp and Fiddle for lunch.

Just like in life, be flexible to make changes in the moment. Identify barriers and see what can be done to break them down. Enhance you experience.

I’ve talked about work life balance a lot over the years. I’ve written about it and talked with groups and individuals. It’s almost always a discussion around how to balance the work life with the family life.  And balancing those two things are incredibly important – but that often leaves one variable out. You need something for you.

I love craft beer. I have brewed it, I visit breweries, I order tasting flights and I seek out new beers. Trust me, I wish I was more interested in marathon running, it would be healthier, but hey – I am what I am. In other news, I also love writing, live music, the beach and all outdoor festivals. And, of course my family.

When I say you need something for you – that doesn’t mean it can’t include your wife and children – I’m just saying identify those things that bring you joy and make sure you balance those in.

When I first saw the prices, I also thought they were a little steep. I mean 30 bucks for 40oz of beer?  That’s 2 and half pints.

And then I had my first beer.

They had everything you could imagine from stouts, IPAs, pales, pilsners, ciders, goses, browns. And most were stuff you’ve never tried, of a higher quality and price point, and higher ABV. Add that to the experience you were getting – an outdoor festival with live music, food trucks, bounce houses and friends.  All of the sudden, $30 seemed pretty reasonable.

I think the lesson is to know value. We are pretty frugal with our spending, but I want to make sure our spending is for experiences. Experiences are valuable. How much is your time and joy worth?

So it was the first ever. And I heard some people being a bit critical. Hell, I’m even being a bit critical. But you know, I didn’t take the initiative to open a business in Park Ridge. I didn’t plan an outdoor beer festival and bring a community together. I think it’s fine to have an opinion and provide some constructive ideas, but tearing something down does no one any good. And let’s face it, it was a pretty great festival.

With all the criticism – these guys could given up. Facilitating a few thousand people drinking on the street isn’t exactly easy. But I think the good FAR OUTWEIGHS the bad. It doesn’t matter what you do, there is someone waiting to tell you how wrong you did it. How is that constructive? Don’t tell me what sucked – tell me how to make it better.

Just like in life – people will criticize. They will tell you you’re doing it wrong – even as they do nothing. Filter those people from your life and surround yourself with those that build you up. Accept feedback and constructive criticism to better yourself – but don’t let the negativity keep you from your own happiness and success.

I commend the owners of Beer on the Wall and Harp and Fiddle. You made something incredible happen. You gave us an experience in our own backyard. You showed the city this is what the people want. You made the business case.

Thank you. And next year, I’ll be there.

Feedback is love. Tell me what you think. And please, share!

Tag your own development so I can find and follow you!